14th November 2017 – Tonejet, the only manufacturer of advanced electro-static drop-on-demand digital print engines, has today unveiled Cyclone, the first industrial production direct-to-can digital printing machine, at InPrint 2017. The Tonejet Cyclone, with integrated Rockwell Automation iTRAK transport system, will be on show throughout InPrint 2017 on Tonejet’s stand 536 in hall A6, illustrating the numerous benefits of direct to shape digital beverage can printing.

“Whether used as a stand-alone digital printer, or integrated into a can production line, the Cyclone not only significantly reduces production time, it also allows manufacturers to print very small runs of each can design. Manufacturers are able to cost-effectively decorate each can individually if desired, representing incredible opportunities for beverage brands”.

The Cyclone unites Tonejet’s unique digital print engine with Rockwell Automation’s state-of-the-art iTRAK intelligent transport system. Unlike traditional carousel systems, which are limited by the slowest and largest operation, the iTRAK object transport system, combined with Tonejet’s passive mandrel technology, allows different processes to each have their own operation time without impacting overall throughput, resulting in a much shorter total processing time.

The Cyclone also features Tonejet’s unique nozzle-less print heads which operate a patented electrostatic jetting process. Tonejet ink is made of charged pigment particles in a non-conducting carrier fluid, that are jetted away from the print head at high speed when a pulse voltage is applied. The formulation means that the majority of the carrier fluid is left behind, producing a very thin, yet high density pigmented layer of ink on the can. The pigment concentration effect is exclusive to Tonejet, and means that the print heads and ink are both economical and functional. The price of printing on to each can is up to 20 times lower than UV cured inks.

Tonejet is the Global Packaging Partner of InPrint in 2017, representing its commitment to leading innovation in digital printing technologies in the industrial printing industry. 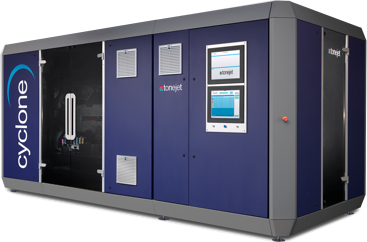